Nat Turner, the Preacher Who Led a Slave Rebellion in Virginia in 1831

Nat Turner was an enslaved African-American preacher who organized and led a four-day rebellion of enslaved and free Black people in Southampton County, Virginia, in 1831.q

Born into slavery on October 2, 1800, in a plantation owned by one Benjamin Turner, Turner never knew his father, who was believed to have escaped from slavery when Turner was a very young boy.

Nat would later be separated from his birth mom in 1810 when he was inherited as property by Benjamin’s son, Samuel Turner.

Turner learned how to read and write at a young age, he also grew up deeply religious and was often seen fasting, praying, narrating visions which he interpreted as messages from God to his fellow enslaved followers or immersed in reading the stories of the Bible.

At age 21, he escaped from his enslaver, Samuel Turner but returned a month later after allegedly receiving a vision which told him to return to the service of his earthly master.

Turner often conducted services, preaching the Bible to his fellow enslaved people, who dubbed him “The Prophet”. He was also convinced that he was “ordained for some great purpose in the hands of the Almighty” and eagerly anticipated God’s signal.

On February 12, 1831, after Nat Turner witnessed a solar eclipse that was visible from much of the southeastern United States, he was convinced that it was the sign from God he had been waiting for.

He began preparations for an uprising against the enslavers in Southampton County by first communicating his plans to some of his trusted fellow slaves.

Ultimately he and his friends were able to enlist more than 70 enslaved and free Blacks, some of whom were on horseback. Armed with knives, hatchets, axes, and blunt instruments, the insurrectionists traveled from house to house, freeing enslaved people and killing many of the slave owners and also appropriating their weapons.

By afternoon Turner had decided to take over the county seat, Jerusalem (now known as Courtland), but on their way there they were defeated and scattered by the state militia infantry who came with twice the manpower of the rebels, reinforced by three companies of artillery.

After the defeat Turner abandoned his goal and went into hiding. 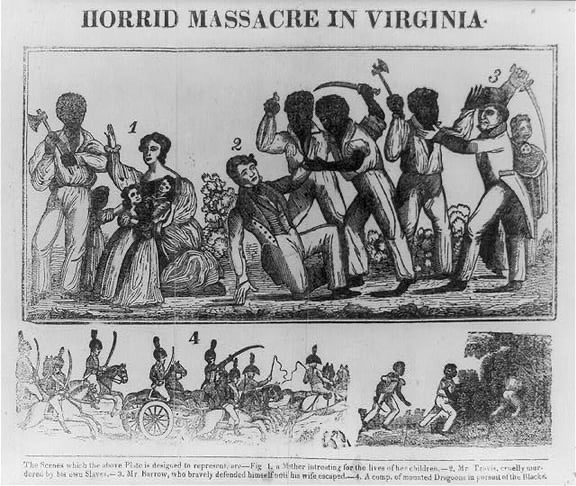 There was widespread fear in the aftermath, and white militias raised from the civil population organized in retaliation to the rebels.

In the 10 days that followed, these white militias killed as many as several hundred blacks, some slaves, some free, many of whom had had nothing to do with the rebellion.

Blacks suspected of participating in the rebellion were beheaded by the militia and “their severed heads were mounted on poles at crossroads as a grisly form of intimidation”. A section of Virginia State Route 658 remains labeled as “Blackhead Signpost Road” in reference to these events. During this time Turner hid out near his owner’s farm, until he was captured on October 30 and jailed in Jerusalem (Courtland), the town he had hoped to overthrow two months before.

Nat Turner was tried on November 5, 1831, alongside over 50 other suspects who had survived the revolt for “conspiring to rebel and making insurrection”, and they were all convicted and sentenced to death.

Nat Turner was hanged on November 11, 1831, in Jerusalem (Courtland), Virginia and beheaded as an example to frighten other would-be rebels. It is alleged that his body was also dissected and his body parts distributed among white families.

John W. Cromwell in a 1920 article in the Journal of Negro History, also alleged that “Turner was skinned to supply such souvenirs as purses, his flesh made into grease, and his bones divided as trophies to be handed down as heirlooms.”

Months after the insurrection, the state of Virginia blamed Turner’s intelligence and education as a major cause of the revolt, and passed new laws prohibiting education of enslaved people and free Black people, restricting rights of assembly and other civil liberties for free Black people, and requiring White ministers to be present at all worship services.

Previous article
António I of Kongo, the African King Who Was Beheaded for Refusing to Cede His Country’s Mines to Portugal
Next article
Kinjikitile Ngwale, the Tanzanian Spiritual Leader Who Was Hanged for Leading a Rebellion Against German Colonial Rule