Kofi is the Akan name for a Ghanaian boy born on Friday. Kingston is the capital of Jamaica. A combination of the two names is the trade name for the current World Wrestling Entertainment, WWE, champion – Kofi Kingston. 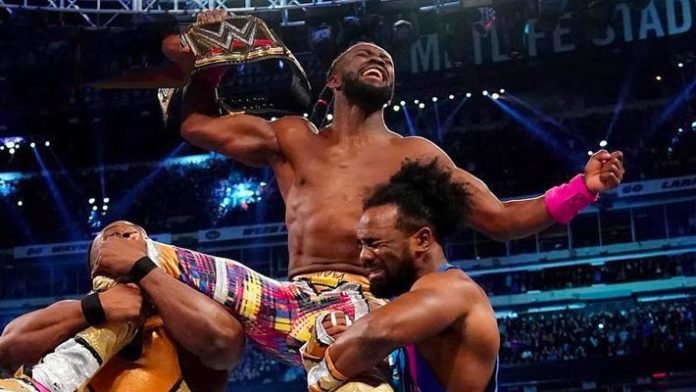 Kofi won the title after defeating the defending champion Daniel Bryan. Some reports suggested that by that feat, he became the first African to become a WWE champion, Yahoo Sports however says he is the second.

The journey to the top has, however, not been easy for the Ghanaian-American sportsman who has been in the wrestling arena for over a decade – 11 years.

The WWE official report on the fixture between Kofi and Daniel described the bout which took place at the MetLife Stadium in New Jersey, as “one of the most emotional in WrestleMania history.”

“With the capacity crowd of 82,265 fans, as well as the SmackDown locker room cheering him on, Kingston managed to persevere through every cruel and unusual maneuver the sadistic Bryan managed to apply,” the report added.

Kofi Nahaje Sarkodie-Mensah, had a tough time trying to outdo the experience champion suffering several set backs in the course of the bout but doing just enough to stay in the game till he unleashed a winning move.

According to Yahoo Sports, the record attendance at the venue had become the highest-grossing entertainment event in history. There were over 82,000 fans across the 50 American states and people of 68 nationalities assembled for the event. It grossed $16.9m eclipsing the previous record of $12.3m.

WrestleMania 35 was not only memorable for its record-breaking figures and stats. The in-ring action offered some truly historic moments as well.

For the first time in WWE history, a women’s match was front and center as the main event, in which Becky Lynch defeated Ronda Rousey and Charlotte Flair in a winner-take-all dual championship match. Kofi Kingston also made history when he became just the second African American to be WWE champion.

According to Bloomberg data, this year WWE is expected to surpass the $1 billion revenue mark for the first time in the company’s history — and with mega events like WrestleMania 35, the company appears well on its way to reaching that mark.