King Eyo Honesty II: This Man Stopped the Killing of Twins in Calabar, Not Mary Slessor

Killing new-born twins was common practice during the pre-colonial times among the Ibibio and efik people of Nigeria, until it was eliminated by an indigenous king in the 19th century whose name has since been replaced with Mary Slessor. 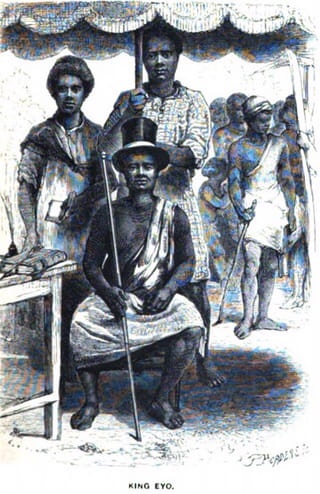 In the pre-colonial and early colonial period, the birth of twins in some areas in the region that would later be known as Nigeria – particularly the Efik and some parts of Igbo land – was considered a bad omen and an abomination that could bring devastation or calamity upon the society. Because of this, the natives often abandoned the twin babies in the forest to die. This practice continued until the 19th century when a progressive king by the name King Eyo Honesty eliminated the practice.

In his youth, Eyo worked as a cabin boy under English captains during the era of the transatlantic slave trade. He was tasked with carrying messages back and forth between officers and the rest of the crew, who occupied different parts of the ship and often times accompanied them in their voyage to the west indies and England.

It was during this time that he learned to speak and write the English language. He also learned the inside and out of the slave trade business and how to trade with the Europeans.

After his stint as a cabin boy, eyo became an interpreter and acted as a middle man between the local merchants and the Europeans. He continued on this path until the death of his father.

Following the death of his father, his younger brother Ekpenyong Nsa was crowned the new king of creek town while Eyo dropped his interpretation gig and ventured into the more lucrative transatlantic slave trade, brokering and selling slaves on behalf of others and himself.

According to his descendants, many chiefs would usually keep their slaves – most of them brought from distant places such as cross river, south-east etc – in the custody of Eyo Honesty for the white buyers.

Eyo Nsa continued on the path of selling Africans for profit to the Europeans until the British made the trade illegal in 1807.

After the British banned slave trade, King Eyo ventured into the business of selling palm oil to white businessmen and in time he became even more wealthier than he was when he was trading saves.

Eyo would later take the mantle of leadership in 1835 after his brother, King Ekpeyong Nsa died.

After his coronation, King Eyo Honesty II – who firmly believed that the route to western civilization was through western education – set out to modernize the Old Calabar society by introducing those western ideas and practices he believed would make his people compete favourably with the Europeans.

He signed the anti-slave trade treaties with the British for the suppression of the practice of slave trade in old Calabar and also sent letters to the British requesting for teachers and missionaries to Old Calabar to establish schools and teach the people, commerce and Christianity.

His requests were heeded and the first missionaries arrived Old Calabar in April 1846.

Upon their arrival Eyo was cited saying, “Now I am sure God will love and bless me, for I am very glad you come with this book.”

King Eyo Honesty II would later eliminate brutal practices such as the killing of twins; human sacrifices; and the immolation of slaves upon the death of an important person in most of Calabar.

By the last decade of King Eyo’s reign, British involvement in several aspects of Efik socio-cultural life was evident, Christianity was spreading and the people were becoming more modernized. Although King Eyo was happy with some of the changes that came with the British missionaries, he protested their interference in matters of the state and also never converted to the white man’s religion.

King Eyo died on 3 December 1858. Although he is termed as a “Christian King”, King Eyo never converted to Christianity and adhered to customs which he believed were unharmful to Christian doctrine.

Mary slessor would later come into the picture in 1876 18 years years after King Eyo Honesty’s death and settled in a small village called Okoyong.

In Okoyong, Slessor went around preaching the gospel of Christ and also enlightening and educating natives about the babarity of killing twins; she also saved hundreds of twins from forests where they had been left either to die or be eaten by animals and took them into her mission home.

In time the story of this white woman became ubiquitous to the extent that it dimmed the light of the man who played a major role in the elimination of the barbaric practice – killing of twins – in most of Calabar. 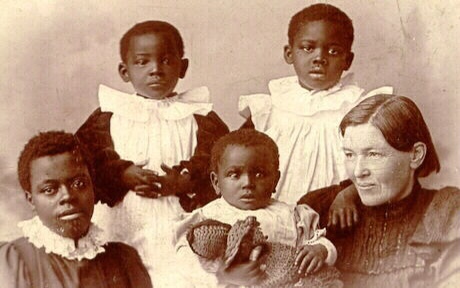 As time went on, stories where told and books were written about the great white woman who went around saving twins from the forests of Okoyong, further cementing the lie that was “Mary slessor stopped the killing of twins in Calabar”

In time, King Eyo Honesty II, the man responsible for eliminating the brutal practice of twins infanticide in most of Calabar was kicked to oblivion and his name swapped with that of Mary slessor, a red haired white woman with bright blue eyes who only helped end the practice in the small town of Okoyong.

Till this day Mary Slessor is still regarded as the person who ended the killing of twins in the entire Calabar.

We’ll never know the real reason why the powers that be rewrote history and made a white woman the saviour of the entire Calabar, but one thing is for sure, if you let a stranger write your history they are always going to write it in a way that glorifies them.

Previous articleOrigin of Death, According to the Ndut People of Senegal
Next articleTop 10 Coffee Producing Countries in Africa, 2022