The Lukasa is a memory device that was used by the Luba people of the Democratic Republic of Congo for record keeping. 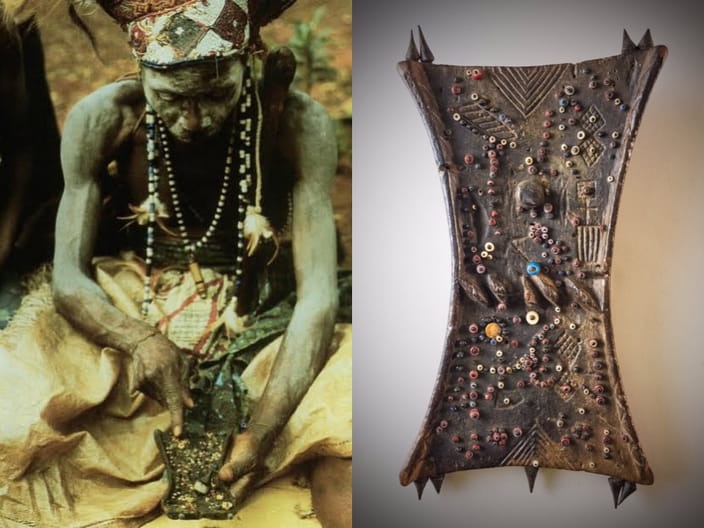 The Luba people or Baluba are an ethno-linguistic group indigenous to the south-central region of the Democratic Republic of the Congo who are most-renowned for their Art; they are especially known for their carvings of anthropomorphic figures, ceremonial axes, and their Lukasa memory board which they used in recording royal history, king lists, migrations, initiation secrets etc.

The Lukasa memory board are hourglass-shaped wooden tablets that are covered with multicolored beads, shells and bits of metal. The board which also have holes and lines cut into them and cowrie shells attached at the top and bottom, serves as an archive for the topographical and chronological mapping of political histories and other data sets.

The Beads on the board are arranged in three ways: a large bead surrounded by smaller beads, a line of beads, and one isolated bead.

The colors and placements of these individual beads serve to stimulate the recollection of important culture heroes and their deeds, paths of Luba migration and significant events and relationships, places, things, relationships and events.

There are/were three distinct categories of lukasa, each emphasizing a certain kind of knowledge.

First, the lukasa Iwa nkunda,” the long hand of the pigeon,” bears information on mythical heroes and early rulers and on the mythical migration routes of the Luba.

Second, the lukasa Iwa kabemba, “the long hand of the hawk,” is concerned with the organization of the Mbudye secret society.

A third type of memory board was created for the use of individual Luba rulers and contained secret information about divine chiefship.

At the heart of the Lukasa is the Bambudye secret society, primarily, the association’s members ‘Bana Balute’ (men of memory) are charged with interpreting, protecting, preserving and transferring the knowledge of the Lusaka memory board.

Aside from being the guardians of the Lukasa, the bambudye also acted as an effective check on the behaviour of the king and even had the power to execute him in case of excessive abuse of power.

The Kingdom of Luba reached its peak between 18th to 19th-century but the raids and violence of the 19th-century slave trade by Arab-swahili slave traders such as Tippu Tip and King Leopold II of Belgium sponsored genocide over the territories that became what is now the Democratic Republic of the Congo, would eventually tear the Luba Empire apart and ended it. The natives of Luba empire were rounded up and forced to work in the copper mines of the Katanga province during the Belgian rule and virtually all their artworks including the Lukasa were taken to Europe and stored in museums.

Previous article5 Ways The Bible Was Influenced By Other Religions
Next articleSarraounia Mangou, the African Queen Who Resisted French Colonial Troops at the Battle of Lougou in 1899