The Little Known Pyramids of Meroë in Sudan

The Kingdom of Kush which housed the city of Meroë was one of the earliest and most impressive states found on the African continent along with Ancient Egypt; and like the Egyptians, they also had pyramids which serve as tombs for their kings and queens and wealthy citizens.

The Little Known Pyramids of Meroë in Sudan

The Kingdom of Kush which housed the city of Meroë was one of the earliest and most impressive states found on the African continent along with Ancient Egypt and like the Egyptians, they also had pyramids.

In Nubia, pyramids were built for the first time at El Kurru in 751 BC to serve as tombs for their elites. The Nubian-style pyramids emulated a form of Egyptian private elite family pyramid that was common during the New Kingdom. But unlike the Egyptian pyramids, the Nubian pyramids are a lot smaller with much steeper sides, and most were built two thousand years after the pyramids at Giza.

Fun fact: There are twice as many Nubian pyramids still standing today as there are Egyptian. 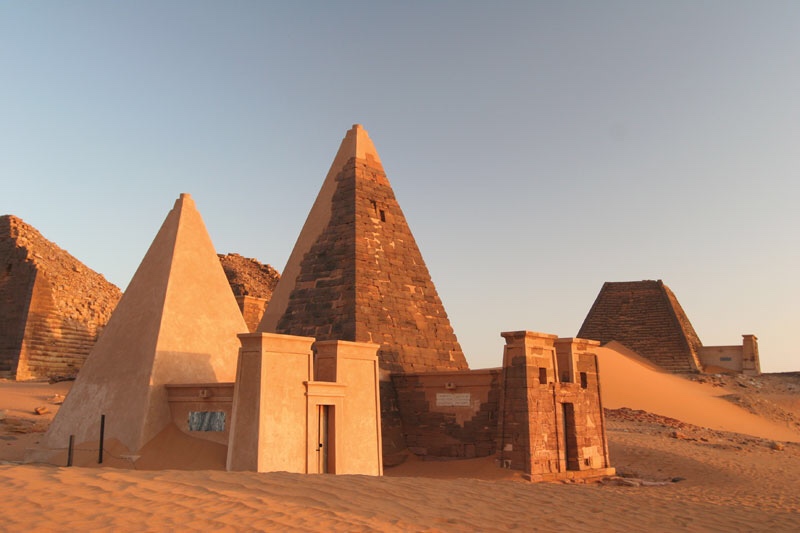 The most extensive Nubian pyramid site is at Meroë, which is located on the east bank of the Nile about 4 miles north of Kabūshīyah in present-day Sudan. During the Meroitic period, over forty queens and kings were buried there.

The Pyramids of Meroë contains three royal cemeteries which were constructed at the time of the Kushite Kingdom over a period close to a millennium:

South Cemetery features nine royal pyramids. Four of the pyramids belonged to Kings and five belonged to queens. One hundred and ninety-five other tombs complete the cemetery.

North cemetery contains forty-one royal pyramids. Thirty belonged to kings, six to queens and five to other royals. The cemetery has three more non-royal tombs for a total of forty-four.

West cemetery is a non-royal site. It contains some one hundred and thirteen tombs.

A pyramid once excavated by archaeologists at Meroë included hundreds of heavy items such as large blocks decorated with rock art and 390 stones that comprised the pyramid.

Wall reliefs preserved in the tomb chapels also revealed that like the Egyptians, their royal occupants were mummified, covered with jewellery and laid to rest in wooden mummy cases. At the time of their exploration by archaeologists in the 19th and 20th centuries, some pyramids were found to contain the remains of bows, quivers of arrows, archers’ thumb rings, horse harnesses, wooden boxes, furniture, pottery, colored glass, metal vessels, and many other artefacts.

In the 1830s the pyramids which were mostly in good conditions were raided and demolished by Giuseppe Ferlini, a treasure hunter who came all the way from Italy came to Meroe seeking treasure. Overall, he is considered responsible for the destruction of over 40 pyramids in Meroë alone.

Today the Meroë pyramids which are one of the main attractions for Sudan’s tourist are recognized as a UNESCO World Heritage Site, yet the incredibly impressive and ancient structures remain relatively unknown.