Top 10 Notable Africans Who Have Died Of Coronavirus

Since the Coronavirus came into Africa, there have been thousands of recorded deaths, and some of those people who died have been celebrities, performers, politicians, etc Basically people notable for what they gave society during their lifetimes. 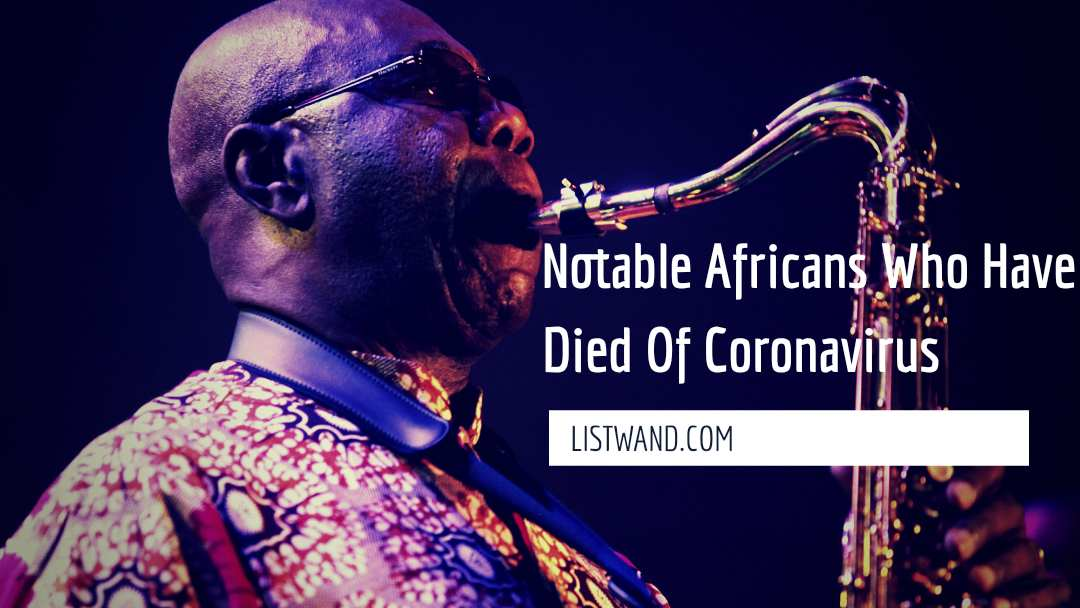 Below is the list of some prominent Africans that have died of coronavirus since its outbreak.

Emmanuel N’Djoké “Manu” Dibango was a Cameroonian musician who was well known in the world of jazz, as he was a prominent songwriter and saxophonist. His career spanned six decades, consisting of numerous hits, though he is likely best known for his 1972 single “Soul Makossa.” That hit would later be sampled by Michael Jackson, Kanye West, and many more prominent musicians all around the world.

News of Dibango’s illness came on his Facebook page, which noted he was hospitalized with an infection from COVID-19 on March 18th. His Facebook page confirmed the following week that he passed away on March 24th from the virus at the age of 86.

Rose Marie was the second vice president of the national assembly of Burkina Faso from December 2015 until her death from COVID-19 complications on 18th march 2020. She was the first recorded person to die of the disease from Burkina Faso and Sub Saharan African. She died at the age of 61.

Mababa “Pape” Diouf was a Senegalese journalist and football agent, who was the president of French football club Olympique de Marseille between 2005 and 2009. He was the first Black President of a top flight football club in any of Europe’s top six leagues

Diouf died on 31 March 2020 after succumbing to the global pandemic of COVID-19 in Senegal. Diouf had been due to fly to Nice, France for coronavirus treatment, but was deemed too ill to travel. He was the first fatality from coronavirus in Senegal.

Gita was a Ugandan-south African scientist and HIV prevention researcher who died on March 31 at the 64 from complications related to COVID-19. Prior to her death, she was the chief scientific officer of the Aurum Institute, a nonprofit organization based in Johannesburg that focuses on HIV and tuberculosis research, and had just returned from a symposium in the UK when she became ill with the virus.

Mahmud Jibril was a Libyan politician and the interim prime minister of Libya for seven months during the Libyan civil war in 2011. He was born on may 25th 1952 and died on the 5th of April 2020 due to complications of COVID-19.

Until his death on 12th April 2020, Khalif Mumin was the state minister for justice in Hirshbelle state, an autonomous region in Somali. He tested positive to COVID-19 on the 17th of April 2020 on his return from united kingdom. He died a day after at the age of 58. He was the second Somali recorded fatality from the disease.

The 82-year-old died in the early hours of April 15 at a clinic in the DR Congo capital, Kinshasa, where he had been in confinement for several days.

He was the central African country’s 22nd victim of COVID-19 and the first African bishop to die of the disease.

Abba Kyari was the Chief of Staff to President of the Federal Republic of Nigeria, President Muhammadu Buhari. Until his death on the 17th of april 2020 at the age of 67

Kyari died after a month-long long struggle with COVID-19. Credible speculation is that he contracted the disease during a trip to Germany. At sixty-seven, he appeared healthy, and during the early stages of his hospitalization he was reported to be cheerful and optimistic.

Kyari, in his 70s, was the highest-profile COVID-19 death in the West African country.

Sekou Kourouma was a political aide to president Alpha Conde of Guinea. He was also the former minister of public works and a close relative to the president. He died of COVID-19 complications on the 18th of April 2020.

Zoro Makamba is a Zimbabwean journalist, TV and Radio presenter, he is the anchor of the most listened radio show ‘state of the nation’ in Zimbabwe. Before his death, he has previously suffered neuroskeletomuscular autoimmune disease. He was diagnosed with COVID-19 on march 21st 2020 twelve days after returning from New York.

He was the first person to die of corona virus in Zimbabwe. He was 30years old.