Charles Sumner, the US Senator Who Was Almost Killed for Speaking Against Slavery

Charles Sumner was an American statesman and United States Senator from Massachusetts. As an academic lawyer and a powerful orator, Sumner was the leader of the anti-slavery forces in the state who fought to minimize the power of the ex-Confederates and guarantee equal rights to the freedmen and this made him lots of enemies. 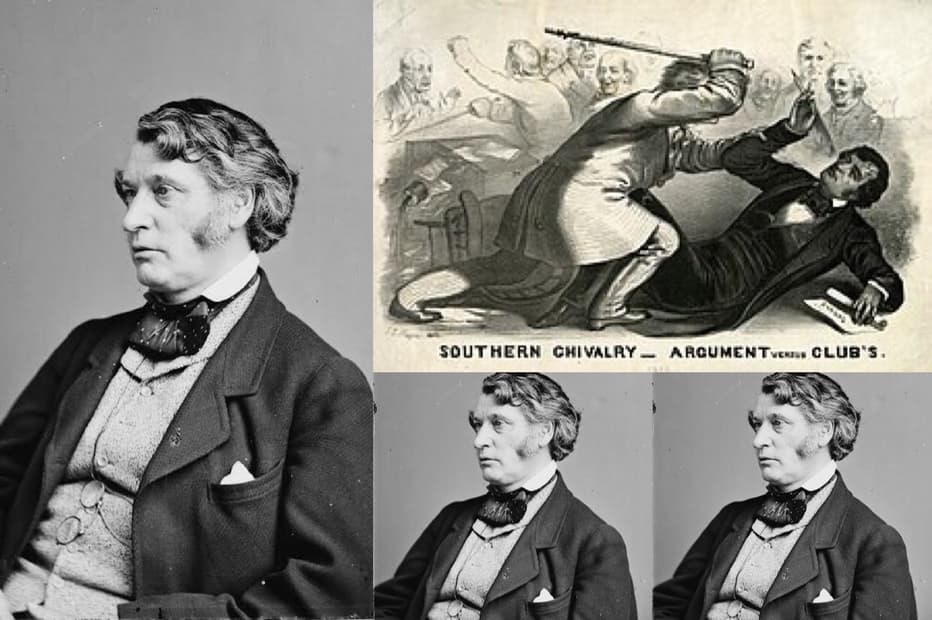 The Beating of Charles Sumner, occurred on May 22, 1856, in the United States Senate chamber, when Representative Preston Brooks, a pro-slavery Democrat from South Carolina, used a walking cane to attack Senator Charles Sumner, an abolitionist Republican from Massachusetts.

The attack was in retaliation for a speech given by Sumner two days earlier in which he fiercely criticized slaveholders, including a relative of Brooks, Andrew Butler. The beating nearly killed Sumner and contributed significantly to the country’s contrariety over the issue of slavery.

In 1856, during the “Bleeding Kansas” crisis, a small civil war in the United States, fought between proslavery and antislavery advocates for control of the new territory of Kansas, Charles Sumner denounced the Kansas–Nebraska Act in his “Crime against Kansas” speech, delivered on May 19 and May 20. The long speech argued for the immediate admission of Kansas as a free state and went on to denounce the “Slave Power”—the political arm of the slave owners.

Sumner also verbally attacked the authors of the Act, Senators Stephen A. Douglas of Illinois and Andrew Butler of South Carolina.

Representative Preston Brooks, Andrew Butler’s first cousin was infuriated. He later said that he intended to challenge Sumner to a duel, and consulted with fellow South Carolina Representative Laurence M. Keitt on dueling etiquette. But that Keitt had told him that dueling was for gentlemen of equal social standing, and that Sumner was no better than a drunkard, due to the supposedly coarse language he had used during his speech. Brooks said that he concluded that since Sumner was no gentleman, he did not merit honorable treatment; to Keitt and Brooks, it was more appropriate to humiliate Sumner by beating him with a cane in a public setting.

The Caning of Charles Sumner 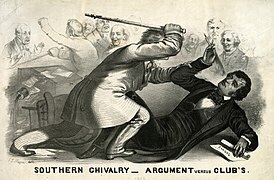 Two days later, on the afternoon of May 22, 1856, Brooks entered the Senate chamber with Keitt and another ally, Congressman Henry A. Edmundson. They waited for the galleries to clear, being particularly concerned that there be no ladies present to witness what Brooks intended to do. He confronted Sumner as he sat writing at his desk in the almost empty Senate chamber. “Mr. Sumner, I have read your speech twice over carefully. It is a libel on South Carolina, and Mr. Butler, who is a relative of mine,” Brooks calmly announced in a low voice. As Sumner began to stand up, Brooks beat Sumner severely on the head before he could reach his feet, using a thick cane with a gold head.

The force of the blows so shocked Sumner that he lost his sight immediately.

“I no longer saw my assailant, nor any other person or object in the room. What I did afterwards was done almost unconsciously, acting under the instincts of self-defense,” he recalled later.

Sumner was knocked down and was pinned under his desk. Brooks continued to strike Sumner across the head, face, and shoulders “to the full extent of his power.” Even when his cane snapped; he continued hitting Sumner with the piece that held the gold head, he flogged Sumner so bad that the floor on which they were standing on was soaked with his blood. 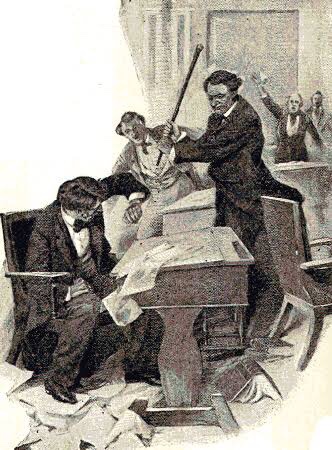 Several other Senators and Representatives attempted to help Sumner, but were blocked by Andrew’s ally, Edmundson, who yelled at the spectators to leave Brooks and Sumner alone, and Keitt, who brandished his own cane and a pistol, and shouted, “Let them be!” and “Let them alone, God damn you, let them alone!”

Near the end of the attack, Sumner collapsed unconscious.

Some Representatives were finally able to intervene and restrain Brooks, at which point he quietly left the chamber. As Sumner regained consciousness they were able to assist him to walk to a cloakroom. Sumner received first aid and medical attention, including several stitches.

Aftermath of the beating

When the news of the thrashing went viral, thousands attended rallies in support of Sumner. More than a million copies of Sumner’s speech were also distributed.

William Cullen Bryant of the New York Evening Post, asked, “Has it come to this, that we must speak with bated breath in the presence of our Southern masters?… Are we to be chastised as they chastise their slaves? Are we too, slaves, slaves for life, a target for their brutal blows, when we do not comport ourselves to please them?”

Two weeks after the caning, an American essayist, lecturer, philosopher, abolitionist by name Ralph Waldo Emerson had this to say: “I do not see how a barbarous community and a civilized community can constitute one state. I think we must get rid of slavery, or we must get rid of freedom.”

Conversely, Brooks was praised by Southern newspapers. The Richmond Enquirer editorialized that Sumner should be caned “every morning,” praising the attack as “good in conception, better in execution, and best of all in consequences” and denounced “these vulgar abolitionists in the Senate” who “have been suffered to run too long without collars. They must be lashed into submission.” Southerners sent Brooks hundreds of new canes in endorsement of his assault. One was inscribed “Hit him again.” 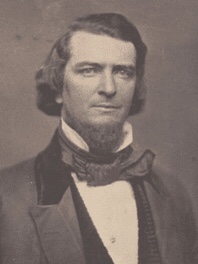 Brooks claimed that he had not intended to kill Sumner, or else he would have used a different weapon. In a speech to the House defending his actions, Brooks was arrested for the assault. He was tried in a court, convicted, and fined $300, but received no prison sentence. A motion for Brooks’ expulsion from the House failed, but he resigned on July 15 in order to permit his constituents to ratify or condemn his conduct via a special election. They approved; Brooks was quickly returned to office after the August 1 vote, and then re-elected to a new term of office later in 1856, but he died of croup (a type of respiratory infection that leads to swelling inside the trachea, which interferes with normal breathing) before the new term began. 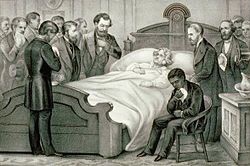 Sumner suffered head trauma that caused him chronic, debilitating pain for the rest of his life and symptoms consistent with what is now called traumatic brain injury and posttraumatic stress disorder; he spent three years convalescing before returning to his Senate seat.

Charles sumner died in office in 1874. Today he is remembered positively for extensive contributions to anti-racism during the Reconstruction era.