Chief Mkwawa: the Tanzanian Chief Who Led a Fierce Rebellion Against German Colonial Forces in the Late 19th Century

Chief Mkwawa was a warrior and leader of the Hehe people, a tribe located in present-day Tanzania. He is known for his resistance against German colonial rule in the late 19th century. 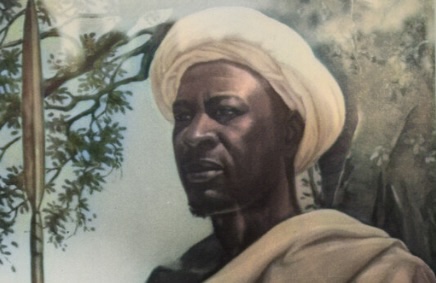 Mkwawa, born in 1855 and named Ndesalasi, which means “Troublemaker,” was the son and successor of Munyigumba, the Hehe people’s leader who died in 1879.

After Munyigumba’s death, Mkwawa inherited the chiefdom and changed his name from Ndesalasi to “Mtwa Mkwava Mkwavinyika Mahinya Yilimwiganga Mkali Kuvago Kuvadala Tage Matenengo Manwiwage Seguniwagula Gumganga“, meaning: “A leader who takes control of the forests, who is aggressive to men and polite to women, who is unpredictable and unbeatable, and who has the power that it is only death who can take him away”

The Germans shortened this to Mkwawa, pronounced “Mkwava” – but it is now commonly pronounced as it is spelt.

In the late 1880s, the German East Africa Company, a German colonial organization, attempted to expand its territory and establish control over the Hehe people. Chief Mkwawa, however, fiercely resisted the German efforts and led his people in a series of battles against the colonizers.

One of the most significant events in Chief Mkwawa’s resistance was the killing of the German commissioner, Emil von Zelewski, in 1891.

Von Zelewski was a high-ranking German official who was leading the efforts to suppress Chief Mkwawa’s rebellion. According to accounts of the time, Chief Mkwawa and his warriors ambushed von Zelewski and his men, killing the commissioner and several of his soldiers in the battle of Lugaro. 

The killing of von Zelewski was a major blow to the German Empire, and they intensified their efforts to defeat Chief Mkwawa and bring the Hehe people under their control. On 28 October 1894, the Germans, under the new commissioner Colonel Freiherr Friedrich von Schele, attacked Mkwawa’s fortress at Kalenga. Although they took the fort, Mkwawa managed to escape. Subsequently, Mkwawa conducted a campaign of guerrilla warfare, harassing the Germans until 1898 when, on 19 July, he was surrounded and shot himself to avoid capture at the site of the Mlambalasi Rock Shelter.

Following Chief Mkwawa’s death, the German Empire removed his head from his body, boiled and removed the flesh, and then shipped the skull to Berlin, where it was displayed as a trophy of their victory alongside 2000 other skulls at the Übersee-Museum Bremen.

The head was eventually returned to Tanzania on 9 July 1954, and was given a proper burial in accordance with Hehe tradition.

Chief Mkwawa’s skull now sits on a plinth, protected by a glass box, in its own museum in Kalenga.

Despite the eventual defeat of the Hehe people, Chief Mkwawa’s resistance against German colonial rule is remembered as a significant moment in the history of Tanzania and the struggle against colonialism.

His bravery and determination in the face of overwhelming odds inspired many others to fight for their independence, and his legacy lives on as a symbol of resistance against colonial oppression.

Previous article
Betsy Heard, the Mixed Race Woman Who Dominated the West African Slave Trade in the 18th Century
Next article
Margaret Garner, the Runaway Slave Who Killed Her Own Daughter Rather Than Return Her to Slavery