Margaret Garner, the Runaway Slave Who Killed Her Own Daughter Rather Than Return Her to Slavery

This is the infamous tale of Margaret Garner,an enslaved African-American woman in pre-Civil War America who slit the throat of her own daughter killing her rather than allow her be returned to slavery.

Margaret Garner was born a slave in 1833 at Maplewood Plantation in Boone County, Kentucky to a house servant. Described as a “mulatto”, Garner was the product of the rape of her black slave mother by a white slave master.

Garner worked as a house slave for her owner, Archibald K. Gaines, and his family. She was gifted to Gaines’s wife, as was the case for many young light-skinned girls born into slavery. They were mostly used as wet nurses (a woman who breastfeeds and cares for another’s child) and personal servants.

In 1849 Margaret married Robert Garner, an enslaved man. Not long after her marriage, her master John P Gaines sold his plantation along with all its slaves to his younger brother – who also happened to be a sexual predator, Archibald K. Gaines.

Few months after her new master moved in to the plantation, Margaret Garners’ first child, Thomas, was born early in 1850.

Unlike her former owner who treated his slaves fairly as human beings, their new owner Archibald treated them with contempt and often forcefully raped Margaret at will.

Garner later gave birth to three more children (Samuel, Mary, and Priscilla) who were all lightskined and believed to be Archibald’s, because he was the only white adult male at the Maplewood plantation.

On January 28, 1856, tired of the degradation that came with being a slave, Robert and Margaret Garner took their kids and fled from their master’s plantation along with several other enslaved families.

Robert Garner had stolen his enslaver’s horses and sleigh along with his gun. Seventeen people were reported to have been in their party; their aim was to seek refuge through the Underground Railroad.

The Garners and their four children eventually made their way to the home of Margaret’s uncle Joe Kite, who had himself been formerly enslaved, and who lived in Cincinnati. The other nine people in their party also reached safe houses in Cincinnati and eventually escaped via the Underground Railroad to Canada.

The Garners’ on the other hand were unlucky as the United States Marshals acting under the Fugitive Slave Act caught up to them at their safe house in Cincinnati and surrounded the property.

The family barricaded themselves inside as Margaret’s husband, Robert, tried to ward them off with the shotgun he had stolen from the plantation.

While her husband was exchanging gunfire with the authorities, it dawned on Margaret Garner that only minutes remained before she and her children would be caught and forcefully returned to a life of slavery. In that moment, Garner decided she would rather her and her children be dead. 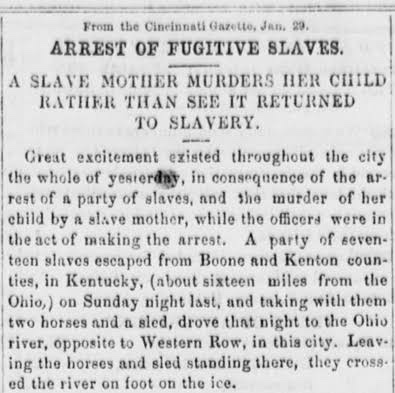 Using a knife she found in the kitchen, Garner slit the throat of her two-year-old daughter. She was about killing her other children, when the federal marshals stormed the house to enforce the legal fact that she was not a mother or a wife, but the property of the man who owned her.

The Garners were taken into custody and tried in what became one of the longest and most complicated case of its kind.

The core issue was whether the Garners would be tried as persons, and charged with the murder of their daughter, or tried as property under the Fugitive Slave Law.

Garner and her husband ended up being tried as property under the Fugitive Slave Law.

During the two week trial, abolitionist and lawyer, John Jolliffe, argued that Margaret’s trips to free territory in Cincinnati entitled her and her children to freedom.

On the closing day of the trial, antislavery activist Lucy Stone Blackwell took the stand to speak on behalf of Garner, she appealed to the court by bringing to their notice the forced interracial sexual relationship that underlay part of the case:

“The faded faces of Garner’s negro children tell too plainly to what degradation female slaves submit, rather than give her little daughter to that life, she killed it. If in her deep maternal love she felt the impulse to send her child back to God… who shall say she had no right to do so?”

Blackwell argued that although Garner’s actions were both rash and severe, they were also, most importantly, merciful.

Although Jolliffe and antislavery activist Lucy Stone Blackwell provided compelling arguments, the judge denied the Garners’ plea for freedom and returned them to their owner Archibald Gaines.

In a bid to gain freedom for Margaret and her children, Garner’s defense attorney, John Jolliffe, moved to have her tried for Murder in Ohio, to be able to get a trial in a free state and to challenge the Fugitive Slave Law.

When Ohio authorities got an extradition warrant for Garner to try her for murder, they were unable to find her for the arrest. Archibald K. Gaines, her owner, kept moving her between cities in Kentucky before finally selling them to his brother in Arkansas. As a result, federal marshals were not able to serve Margaret with an arrest warrant and she never received a second trial.

Margaret Garner died in 1858 at the age of 25 from a typhoid epidemic. Her last words to her husband was “never marry again in slavery”.

Previous article
Chief Mkwawa: the Tanzanian Chief Who Led a Fierce Rebellion Against German Colonial Forces in the Late 19th Century
Next article
Gustav Badin, the Enslaved African Who Was Gifted to the Queen of Sweden in the 18th Century