The Pikworo slave camp was a slave trading camp in Ghana where enslaved Africans were sold to English, French and Dutch slave traders. The Slave camp was founded in 1704 and was active until 1845. 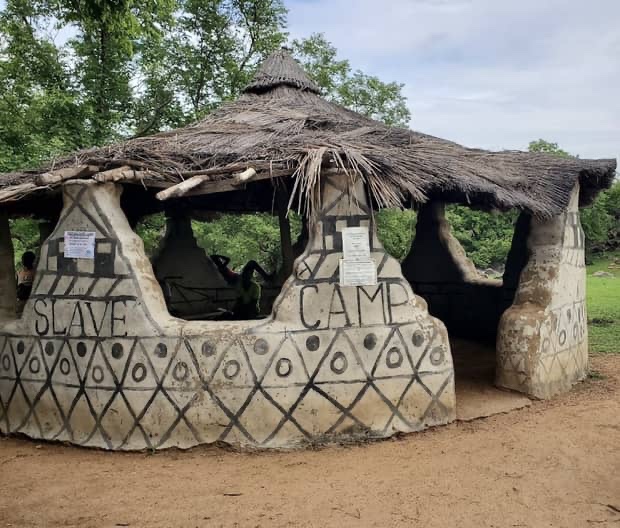 Prior to Europeans setting their foot on the African continent, many societies in Africa traditionally kept slaves who were were mostly used for domestic purposes. They were an indication of power and wealth and not used for commercial gain. The more slaves one had, the more powerful he was perceived to be. However, with the appearance of Europeans desperate to buy slaves for use in the Americas, the African man was corrupted with guns and ammunition and the transatlantic slave trade was birthed.

The transatlantic slave trade was a dark period in human history that lasted from the 16th to the 19th century and involved Europeans trading manufactured goods and weapons for captured Africans, who were then shipped across the Atlantic Ocean to become slaves in the Americas.

According to historians, the transatlantic slave trade transported between 10 million and 12 million enslaved Africans across the Atlantic Ocean to the Americas.

The vast majority of these slaves were Africans from the central and western parts of the continent, who were in most cases sold by their fellow Africans to European slave traders in exchange for guns and other exotic goods.

Various sites have been maintained for remembering this brutal period in human history. In Ghana, one of such sites is the Pikworo Slave camp.

Established in 1704, and lasting all the way until 1845, Pikworo slave camp served as a slave collection outpost by Ghanaian traders who sold humans – mostly prisoners of war – to the French, the English, and the Dutch.

According to local guides, the camp had an average of 200 slaves at any given time.

One of the special features of the camp are the gashes on the rocks which served as eating plates or bowls for slaves at the camp. The larger the size of the scoop the higher the number of slaves to eat from the scoop.

According to local guides, the gashes were made by slaves who tried to escape, and were chased down.

These slaves would be housed and fed like the animals they were not, auctioned to other buyers and when it’s time, transported to Salaga slave market .

The Salaga slave market served as a meeting point for the local slave merchants who journeyed far and wide and Europeans.

The market was just like a typical market, but instead of food produce, enslaved humans were sold.

The local slave merchants – including those who came with their slaves all the way from Pikworo – would display their captives in the market while the Europeans shopped around picking out those (men, women and children alike) they felt were agile enough to work on plantations. There was no transaction in cash, It was just gunpowder or guns in exchange for human beings.

After their shopping, the slaves were herded to the coast and marched into waiting ships, — both sexes were separated; men, women, and children were kept naked, packed close together; and the men were chained — to be exported to the Americas.

The trip to the Americas was dangerous and horrific for African slaves and about 12 percent of those who embarked did not survive the voyage across the Atlantic.

According to historians, for every 100 slaves who reached the New World, another 40 had died in Africa or during the Middle Passage.

This practice of Ghanaians organizing slave raids to provide the Europeans with slaves didn’t stop until slavery was abolished in Europe and ceased to be profitable.

Not long after slave trade was abolished, Pikworo camp and salaga slave market were abandoned by the local slave merchants.

The two locations are still standing till this day and are now tourists attractions.