Betsy Heard was a powerful female slave trader who rose to prominence in 18th century West Africa. Operating out of the Bereira river, she oversaw the transportation of thousands of enslaved Africans to the Americas. 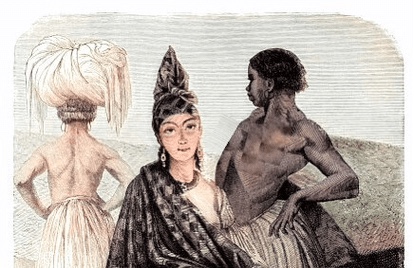 Born into a mixed-race family, her father was an European slave trader who had travelled from Liverpool, England, to the Los Islands (Îles de Los) off the coast of what is now Guinea, in the mid-1700s and her mother was African.

At a young age, Betsy was recognized as exceptionally intelligent, and she was sent to Liverpool, where she was boarded and educated.

Upon her return to West Africa, she set up a trading post on the Bereira River and inherited her father’s connections and slave-trading warehouse in Îles de Los. By 1794, she had established a monopoly on the slave trade in the area, becoming one of the most successful and wealthiest traders in the region. She owned the main wharf in Bereira, several trading ships, and a warehouse until her retirement.

Her success was in part due to the Islamic jihad in Futa Jallon; the vanquished were enslaved and sold to her. Bereira itself was seized by the Muslims, who sought to force the population to convert to Islam, but this had no detrimental effect on her business. She became recognised as the unofficial queen of the river up to the end of the century.

In addition to her successful business ventures, Betsy Heard’s wealth and political influence also earned her a reputation in diplomacy. She was often called upon to mediate disputes between indigenous peoples and the white man. Her ability to navigate the complex political landscape of West Africa made her a valuable asset to the community.

Her mixed heritage, being the daughter of an European father and African mother, might have played a role in her ability to navigate both worlds and become successful in the trade.

Heard was also responsible for mediating a longstanding dispute that had persisted from 1800 to 1807 between several local chiefs and the Sierra Leone Company, thus averting a war. However, after 1807, not much information can be found about her. It is uncertain whether she retired or if she continued to be active in her business or diplomacy. What is certain, however, is that she was not only involved in the illegal trade of human beings, but also profited from the suffering and death of countless enslaved Africans.

Previous article
Amanirenas: The One-eyed African Queen Who Defended Her Kingdom Against the Roman Empire
Next article
Chief Mkwawa: the Tanzanian Chief Who Led a Fierce Rebellion Against German Colonial Forces in the Late 19th Century