Singapore announced on Tuesday that it had made a record seizure of 8.8 tonnes of elephant ivory. 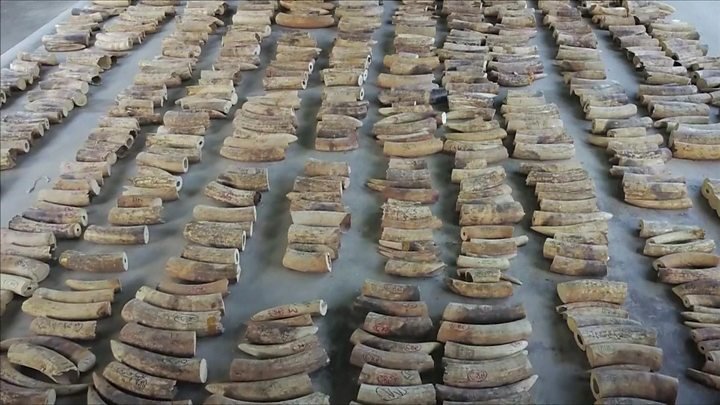 According to conservation groups, the city-state has become a transit point for illegal wildlife trade.

Elephant ivory, estimated at $12.9 million, came from 300 African elephants in the Democratic Republic of Congo and headed to Vietnam.

The seizure of ivory reached just under 9.1 tonnes in Vietnam in March, according to the Environmental Investigation Agency, an NGO.

Singapore is a signatory to the Convention on International Trade in Endangered Species of Wild Fauna and Flora(CITES).

The Asian nation also declares its solidarity with global efforts to combat illegal trade in wildlife.

It is not the first time such illegal goods have been found in Singapore. The country has seized a total of 37.5 tonnes of pangolin scales since April this year.

“Singapore has always been inadvertently implicated in the global ivory trade for two reasons: its global connectivity, as well as the presence of a small domestic market where pre-1990s ivory can be legally sold,” Kim Stengert, chief communications officer for the World Wildlife Fund (WWF) Singapore, told Reuters.

Ivory is used for ornaments and in traditional medicine in Asia. Pangolin scales are also in high demand in Asia for use in traditional Chinese medicine.

The pangolin is said to be the most widely trafficked mammal in the world.

Under Singapore’s Endangered Species Act, the maximum penalty for illegally importing, exporting and re-exporting wildlife is a fine of up to S$500,000 ($370,000; £295,000) and/or two years imprisonment.