Project Atlantropa: A German Architect’s Plan To Merge Europe And Africa Into One

In Sörgel’s Atlantropa, white Europeans would rule as the dominant race, using black Africans as a strictly segregated source of manual labor. 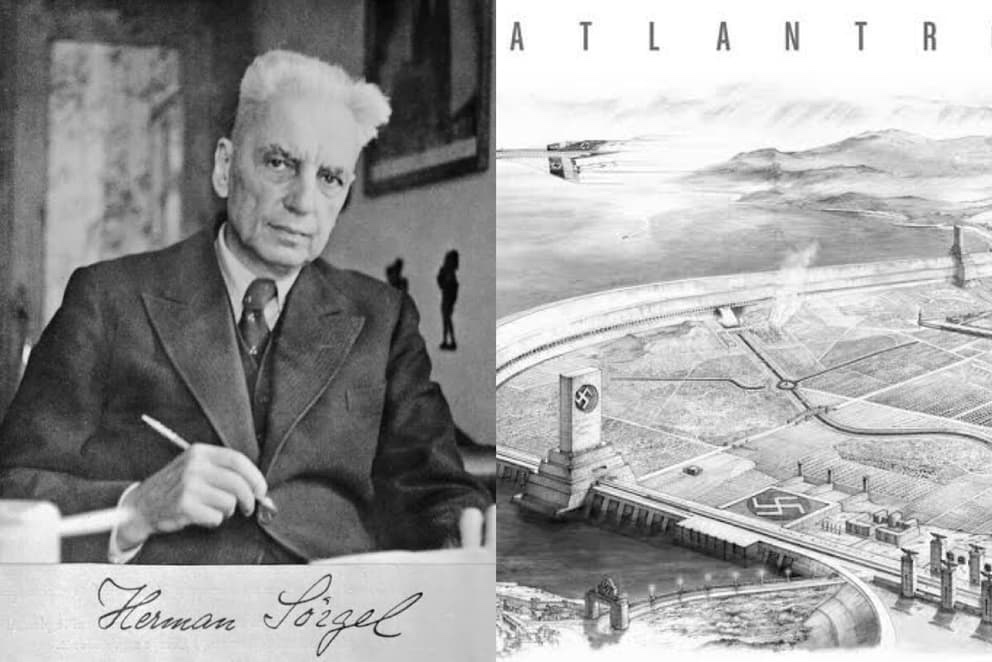 Weird people have walked the earth, and as they left, those who embraced their weirdness didn’t fail to leave trails that represent our best chance of defining strangeness. One prominent member of this group of weird people was the German Architect, Hermann Sorgel (1885 – 1952), who proposed the plan to drain the Mediterranean and merge Europe and Africa into one supercontinent called Panropa (later, Atlantropa).

Now, you will find a little detail about Sorgel’s plan and how he fought to see it come to life in the latter part of this article. But before that, recall that one of Gandhi’s seven social sins was Science without Humanity. On this backdrop, you can judge for yourself if the unusual idea of Atlantropa was a necessary evil or a poorly considered good.

However, it might interest you to know that Atlantropa didn’t see the light of day, not because of morality, but because politics at the time didn’t favor it. The point is you don’t have to hold yourself up to Gandhi’s standards, as long as you keep your mind open enough to consider the implications of Sorgel’s Atlantropa without bias.

Sorgel proposed Atlantropa in the early twentieth century when Europe headed towards population growth and foreseeable depletion of natural resources and living space. Atlantropa, which Sorgel called Panropa at the time, proposed constructing a network of giant dams across the Straits of Gibraltar.

According to Sorgel, these dams would cut off the water supply to the Mediterranean, thereby creating a drastic drop of about 200 meters in the sea level. This drop would make it possible to link Europe and Africa by land. Sorgel further explained that the amount of energy this dam could generate would be enough to cater for half of Europe’s electricity needs in an era when industrialization was budding at all corners of a world recovering from the war.

Sorgel described his Atlantropa as an “inexhaustible” supply of energy, abundant “lebensraum” (living space), and endless food supply. He also offered his plan as a solution that could prevent another world war. Atlantropa gained more attention when in 1929, Sorgel explained his plan through a book he titled, Lowering the Mediterranean, Irrigating the Sahara: The Panropa Project.

So, one could say that the motivation for Hermann Sorgel’s Atlantropa was a technological solution for Europe’s economic problems. He even presented it as a social solution. However, when Atlantropa did not receive the acceptance he expected, further developments revealed other darker intentions he had in mind that made his plan appear not just as an economic solution but also as a weapon of control and racism.

Sorgel’s idea of Atlantropa presented him as a progressive technologist. But it seemed a part of him that refused to grow with his ideas was his skewed understanding of race. His innovation came when Germany had more enemies than friends. He believed he could counter the threat to his country with a plan that would form en bloc the entire world into three: the Americas, Asia, and Atlantropa, his supercontinent.

To achieve Atlantropa, it’s either Sorgel didn’t think the plan through, or he didn’t care about the apparent consequences as long as Europe thrived. One of the major criticisms against the execution of Atlantropa was that it would destroy the Mediterranean through salination.

Also, Sorgel’s plan for the dams proposed the blocking of the Congo river. This plan, if executed, would have redirected the waters into Central Africa, meaning that millions of Africans would have lost their homes as the dry ground they have known for centuries would become swamps. In his plan, Atlantropa was never a union between two continents. Instead, it was a place where the white Europeans would dominate as a superior race while Africans would be a convenient supply of labor.

Desperate for support, Sorgel went to the Nazis, confident they would back his racist agenda. But it turned out that even with the violence Atlantropa promised, Hitler’s Nazi thought the plan was too peaceful and diplomatic for their liking. Besides, Atlantropa also wasn’t a threat to the Soviet Union, whose decimation at the time was more of Hitler’s priority than flooding a portion of Africa.

Sorgel and his Institute continued promoting his idea even after World War II and the fall of the Nazis. But subsequent events proved that Atlantropa was never meant to have an existence beyond an idea. By the end of the war, Europe had better promises of alternative energy sources that were more practical, efficient, and feasible than building monstrous dams to link continents. One of those energy sources was the discovery of nuclear power.

Here’s a video Sorgel made in 1950 presenting the Atlantropa project.

Before Sorgel died in 1952, he had written four more books and countless articles and delivered many lectures, explaining his idea. But the world had moved on. While on his way to Munich University, probably to give one more class to a dwindling audience, he was knocked off his bicycle by an unknown driver. He died, and his idea ran cold in his brain.
In 1960, what was left of Sorgel’s Atlantropa Institute and sympathizers, finally gave upon the possibility of the idea coming to life forever.

Previous article
Cathay Williams: The Trailblazing Woman Who Disguised Herself as a Man to Serve in the US Army
Next article
The Rise and Fall of Sankore Madrasah, the Ancient Center of Learning in Timbuktu