The Colfax Massacre: Remembering the 1873 Massacre of African Americans in Louisiana by White Supremacists

The Colfax massacre was a violent event that took place on April 13, 1873, in Colfax, Louisiana, in which a white mob killed an estimated 150 – 300 African Americans. The event is considered one of the most significant racial massacres in the history of the United States, and it has been cited as an example of the challenges faced by African Americans during the period of Reconstruction following the Civil War. 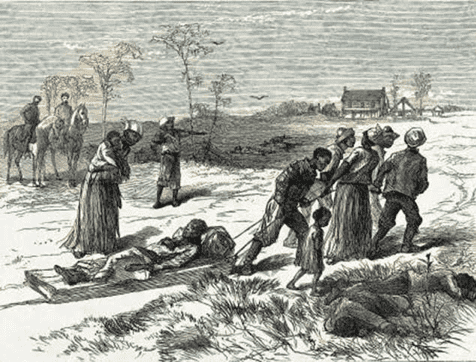 The Colfax massacre occurred during a power struggle over control of the Grant Parish courthouse in Colfax, Louisiana. The courthouse, which had been the site of a previous violent altercation between white and black factions, had come to symbolize the struggle between the two groups for political and economic control in the area.

At the time of the Colfax massacre, Louisiana was in the midst of a disputed governor’s race between Republican William Kellogg and Democrat John McEnery. The state was also still recovering from the effects of the Civil War and the subsequent period of Reconstruction, during which African Americans in the South had gained greater rights and political representation.

As tensions between white and black residents of Grant Parish escalated, a group of black residents and their allies, many of them veterans of the Union army, occupied the courthouse in Colfax in order to prevent it from being seized by white supremacists.

On April 13, 1873, a white mob of approximately 150-200 men, many of them Democrats, attacked the courthouse with the intention of regaining control of the parish government and expelling the black residents from Colfax.

The attack on the courthouse was brutal and indiscriminate, with the white mob firing into the building and setting it on fire. Many of the black residents and their allies were killed in the fire, while others, many of whom were trying to flee the area, were rounded up and executed. 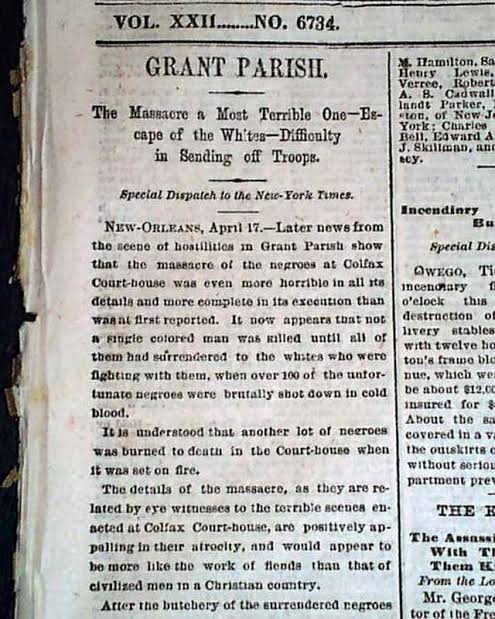 Governor Kellogg eventually dispatched colonels Theodore DeKlyne and William Wright of the state militia to Colfax with orders to restore calm. The Colfax courthouse was in ruins and in flames when DeKlyne and Wright arrived. They also discovered numerous bodies of African Americans that had been shot in the neck or back of the head. They also noted the heinous nature of many of the killings, claiming that one body was set on fire, another had his head bashed so hard that it was unrecognizable, and another had his throat slit. 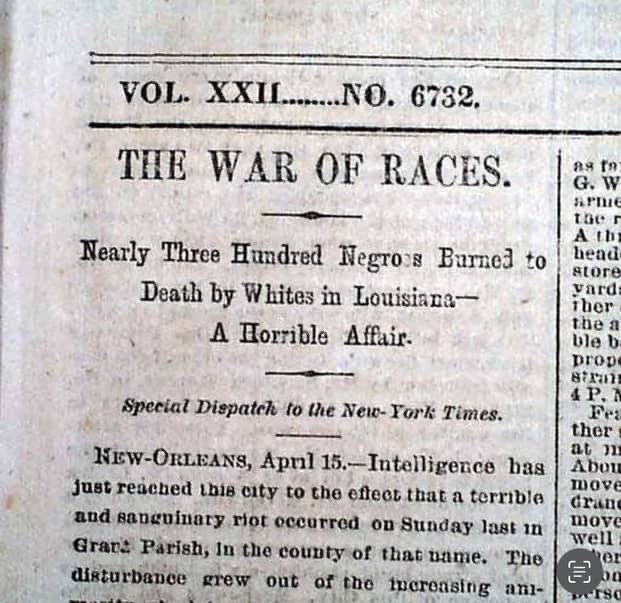 Estimates of the number of dead have varied over the years, ranging from 105 to 300; three whites died but the number of black victims was difficult to determine because many bodies were thrown into the Red River or removed for burial, possibly at mass graves.

“The organization against them is too strong. …” “They attempted [armed self-defense] in Colfax. The result was that on Easter Sunday of 1873 when the sun went down that night, it went down on the corpses of two hundred and eighty negroes.

The event is considered to be one of the worst instances of racial violence in the history of the United States, and it has been described as a “massacre” and a “pogrom.” 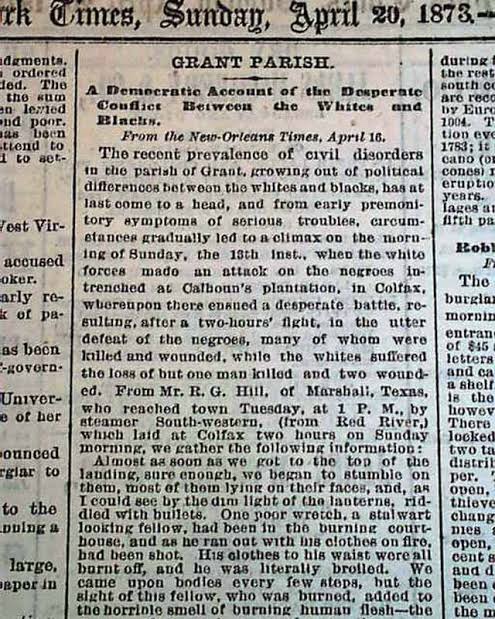 The massacre was widely condemned at the time, and President Ulysses S. Grant considered sending federal troops to restore order in Louisiana. However, no federal troops were sent, and the perpetrators of the massacre were not brought to justice.

The Colfax massacre had a significant impact on the African American community in Louisiana and the broader United States. Many African American residents of Colfax and surrounding areas were forced to flee for their lives, and the event served as a reminder of the deep-seated racial hatred and violence that persisted in the South in the aftermath of the Civil War.

The massacre also had legal implications as three white supremacists were charged with Civil rights violation but Supreme Court case U.S. vs. Cruikshank in 1875 overturned the convictions, ruling that the federal government could not prosecute individuals for violating the rights of African Americans, effectively removing the power of government to prosecute Klan members who were committing violence towards African Americans.

The Colfax massacre and the events that followed it were instrumental in the rollback of the progress made by African Americans during the Reconstruction era, and set the stage for decades of discriminatory laws and practices in the South. It wasn’t until the Civil Rights Movement of the 1950s and 1960s that African Americans in the South began to make significant progress towards achieving equal rights and protection under the law.

The massacre was not only the worst instance of racial violence in the history of Louisiana but also a pivotal moment in the nation’s history and a stark reminder of the deep-seated racism that existed in the country.

In the years that followed the Colfax massacre, many African American men and women continued to face intimidation, violence, and discrimination as they struggled to assert their rights as citizens and to achieve equality under the law. Today, the Colfax massacre serves as a reminder of the tragic history of racial violence in the United States and the ongoing struggle for civil rights and racial justice.

Previous article
The Tragic Case of George Stinney Jr: The Youngest Person Executed in the United States in the 20th Century
Next article
Amanirenas: The One-eyed African Queen Who Defended Her Kingdom Against the Roman Empire