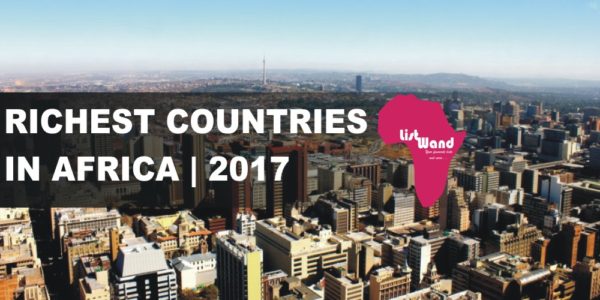 The African continent houses a total of about 1.07 billion people in the 54 countries of the continent. Though the continent is rich in resources -both natural and human, the people have been exploited for decades and are poverty stricken. It is expected that the African economy will reach a GDP of $29 trillion by 2050. However, it is also estimated that the disparity in income will deter the wealth distribution among the people of the continent. Currently, a number of African countries are among the poorest while others have some of the fastest growing economies in the world.

The list below compiles the top 10 richest countries in Africa according to their GDP per Capita .

**GDP per capita is a measure of a country’s economic output that accounts for population. It divides the country’s gross domestic product by its total population. That makes it the best measurement of a country’s standard of living. It tells you how prosperous a country feels to each of its citizens..

Namibia is located in Southern Africa. The country has a per capita GDP of $11,528, it is the tenth richest country in Africa. Mining, agriculture, manufacturing, and tourism all play large parts in the country’s economy. The country is sparsely populated, with a population of around 2 million.

Tunisia is a North African country bordering the Mediterranean Sea and Sahara Desert. The country has a per capita GDP of $11,528, it is the nineth richest country in Africa.

Egypt is a transcontinental country with territories stretching from Africa’s northeast corner to Asia’s southwest corner across the Sinai Peninsula. Egypt shares its borders with the Gaza Strip and Israel, the Red Sea, Gulf of Aqaba, Red Sea, Sudan, and Libya. Cairo is the capital of the country. It ranks eighth on our list with a per capita GDP of $12,994.

The economy of Egypt depends on agriculture, tourism, natural gas, and petroleum imports, as well as revenues from the Suez Canal. A large number of Egyptians also work abroad. The remittances of these workers contribute to the wealth of the nation.

South Africa, the southernmost country on the African continent, is bordered by Namibia, Zimbabwe, Botswana, Swaziland, Lesotho, and Mozambique. The country has a mixed type of economy and has a relatively high GDP compared to other African countries. Despite this fact, South Africa has high rates of unemployment, poverty, and a wide gap between the rich and the poor. Nonetheless, it ranks seventh on the list with an average per capita income of $13,403.

Algeria, the largest country in Africa, is located in the Northern part of the continent. It is the 6th richest country in Africa with a GDP per capita of $15,510. The country has a population of over 40 million. Like many countries on this list, it is considered by the World Bank to be an upper middle country.

Botswana is located in southern Africa. The country is known for its reputation as a stable democracy. It is the 5th richest country in Africa with a GDP per capita of $18,146.

A Central African country, Gabon is located on the west African coast and is bordered by Equatorial Guinea, Cameroon, and the Republic of the Congo. Libreville is the capital and biggest city of the country. It ranks fourth on this list with an average GDP of $19,266.

Mauritius is an island country located in the Indian Ocean off of the southeast coast of the African continent. Throughout its history, the country has been at times a Dutch colony, a French colony, and a British colony. It has been independent since 1968 and has a population of around 1.3 million. It is the third richest country in Africa with a GDP per capita of $21,528.

Equatorial Guinea is a country located in Central Africa. It is relatively small, covering only around 10,830 square miles. The population measures at around 1,222,245. It is partly this low population that helps the GDP to remain relatively high. It comes in first place with a GDP per capita of $38,865.